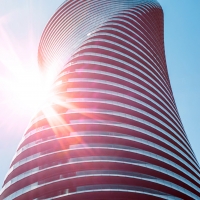 Why is my house so hot?

If you’ve ever noticed that it feels much cooler at the cottage or rural areas than at home in the city, you’re not wrong. Thanks to the urban heat island effect, cities tend to have much hotter temperatures than the surrounding countryside.

Research shows that the annual average temperature of cities with a million or more people can be as little as 1ºC warmer and as much as 12ºC warmer than nearby areas.

This is because the concrete, brick and asphalt that make up the environment in urban areas absorb heat from the sun during the day and emit some of that heat at night. Urban structures can also increase the absorption and reflection of solar radiation, as well as reduce airflow.

Meanwhile, buildings, cars and machinery in cities can make the situation worse by releasing waste heat. Global warming and population growth are also adding to the urban heat island effect.

Fortunately, if you live in a city there are a few things you can do to help cool off your community. Help plant trees around your home, neighbourhood or local park, as tree-shaded spots can be as much as 5ºC cooler than the surrounding area.

If you’re renovating or are involved in a new construction through work or home, choose cool or reflective roofs that help lower indoor air temperature by reflecting the sun’s energy.